Jack Mundey, the Green Bans, and the Battle for The Rocks

Happy birthday to Jack Mundey, the cultural and environmental activist, who shaped The Rocks. 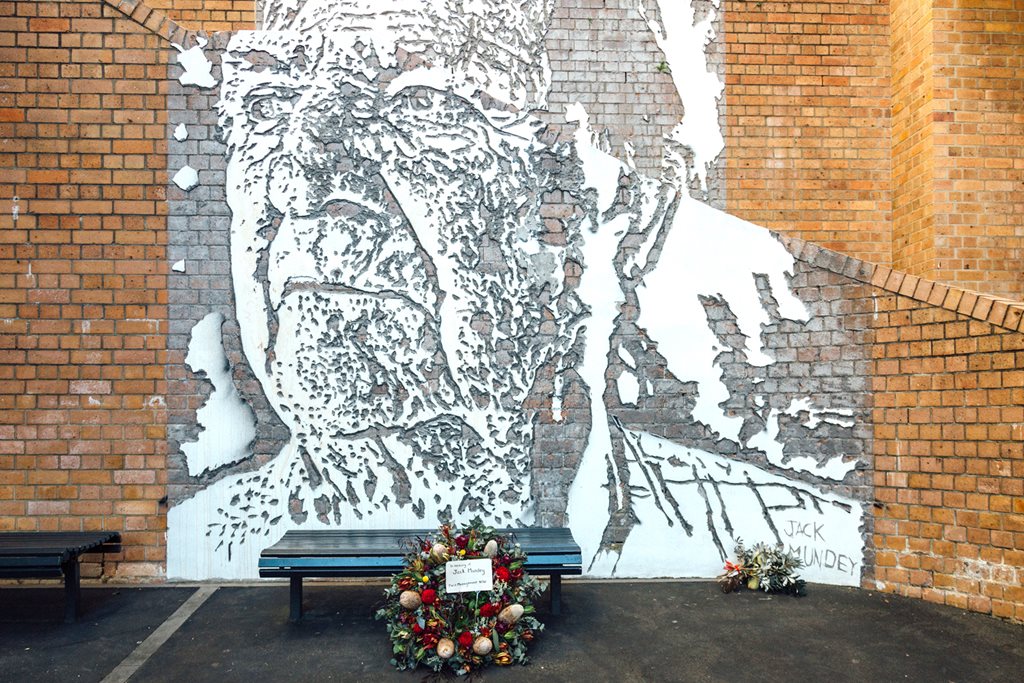 Jack was born in North Queensland in 1929, moving to Sydney as a young man to pursue a career as a professional footballer. While that career didn’t progress as far as he’d hoped, Jack was to find prominence in the Trade Unions, specifically the Builders Labourers Federation.

During the late 1960s and early 1970s there arose an international movement of urban communities demanding a greater role in determining the quality and future of their built environment.  This movement was diverse, representing different social classes and their varying interests.  Heritage conservation was only one element in this movement, in conjunction with affordable housing, the scale and character of development, natural conservation, recreation, air quality, etc.

The Rocks' Green Bans arose not as a direct response to the threat to historic buildings, but in response to the already initiated activism of local residents aiming to preserve their community, and demanding affordable housing.  This local movement was one of many such groups formed in Sydney at the time, each with its own specific agenda and personalities.  The Rocks Resident Action Group was led by Nita McRae, a fifth generation Rocks resident, and women were prominent participants leading this and other resident action groups.  The activism of the Rocks Resident Action Group was targeted towards the Sydney Cove Redevelopment Authority, which in 1970 was given responsibility for the redevelopment of The Rocks.

The sympathetic Builder Labourers Federation leadership, given voice by Jack Mundey, were enlisted to the cause of the various resident action groups.  Frustrated by existing government channels, unlikely alliances formed throughout Sydney between resident action groups (often in middle class suburbs) and the left-wing Builders Labourers Federation.  In The Rocks, the BLF formed a more ‘natural’ alliance with a working class community.  Greens Bans, placed only at the request of local residents, were presented as the last resort to halt development happening against the wishes of the local communities.

The protest in The Rocks, and the Green Bans movement as a whole, received its greatest public attention in October 1973 when residents and four members of the BLF barricaded a demolition site on Playfair Street and climbed onto the roof of the buildings and even into nearby trees.  The police response, the ensuing scenes, and the large number of arrests (including Jack Mundey), provoked widespread media coverage and commentary.  Government and developers cast the Green Bans as undemocratic and provocative actions by a militant union.  However, the widespread community support for the Green Bans demonstrated, not political support for the far left, but a commonly shared view that local residents had little voice in planning and development processes.

The wider debate concerning social and environmental issues in planning and development lead in the later 1970s to new planning legislation which incorporated the principles of public participation and the assessment of environmental impacts.  While major redevelopment in The Rocks continued to be frustrated during the 1970s, conservation projects were one of the few activities which the Sydney Cove Redevelopment Authority was able to undertake without protest.  The Greens Bans in The Rocks had mainly been a response to the issues of affordable housing and preservation of the existing community, but they had the effect of delaying major development until after the introduction of new heritage and planning legislation, by which time heritage conservation had risen to the foreground, and the Authority had meanwhile provided alternative housing to large numbers of residents within the area.  The Rocks' Green Bans may have been primarily intended to save the working-class community of The Rocks, but they also brought a focus on the saving of buildings and streets, and the national recognition of this significant historic precinct.

In recognition of Jack’s involvement in saving The Rocks, a bronze commemorative plaque was unveiled in Rocks Square in 1996. Since then, further installations have celebrated his and others’ actions to save the historic nature of the area; a section of Argyle Street was renamed Jack Mundey Place in 2007, and a mural depicting Jack was created in Globe Street by Portuguese artist Alexandre “Vhils” Farto in 2013.

Jack continued his advocacy for heritage conservation. Jack loved The Rocks, and since the days of the Green Bans, continued to meet up with Place Management’s heritage and museum staff for a steak and beer in the precinct.

The presentation of The Rocks today is a direct result of his actions, and his legacy which directly led to the adoption of National and State planning and heritage legislation. 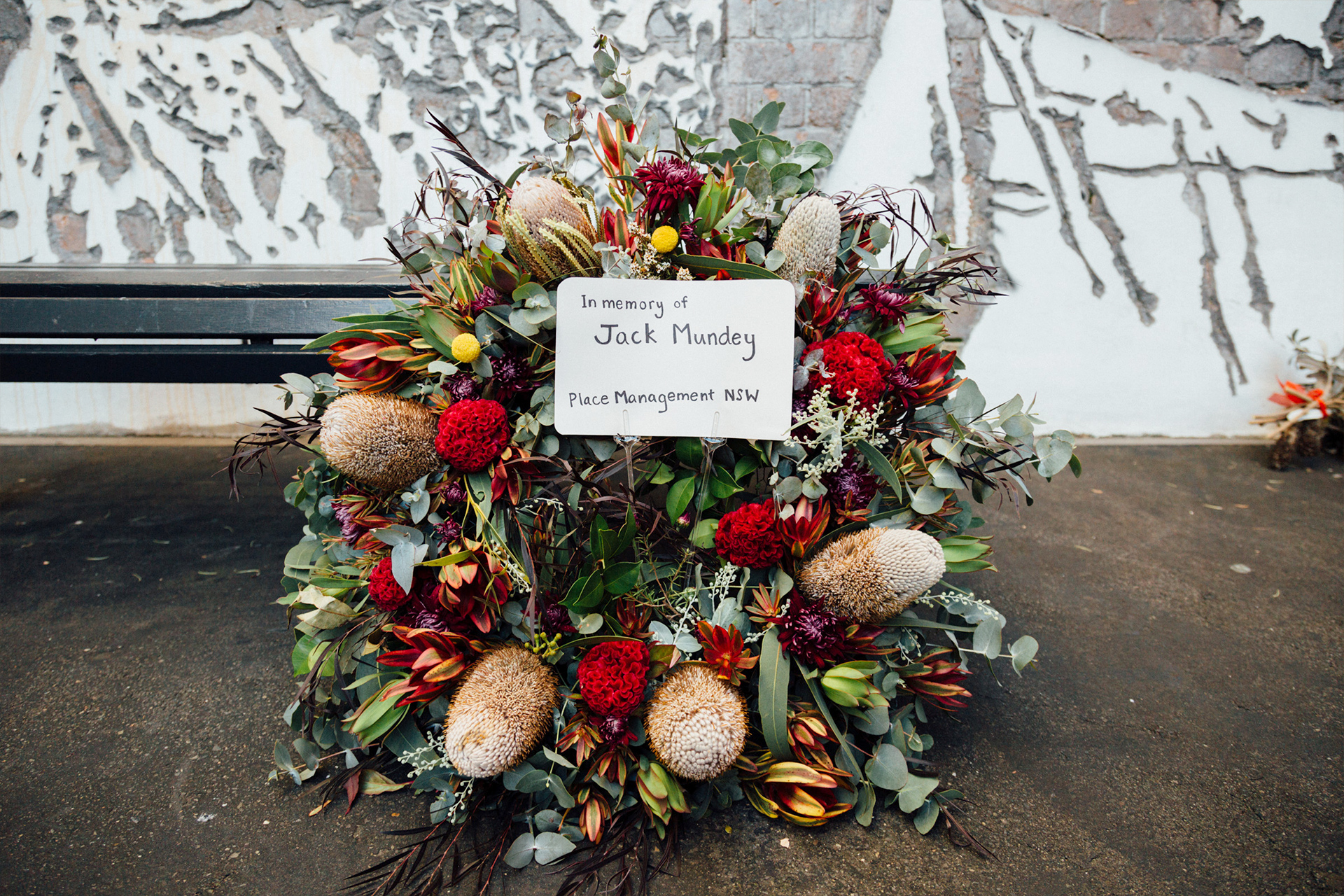 Zoom catch ups at The Rocks’ most iconic spots
Change those trackies for fancy pants and get your hair did, because your next work meeting or social event is harbourside at The Rocks. Sort of.
Read Article
5 of the best public parks in The Rocks
If you’re looking for a green space among the bricks, we’ve got you covered. These are the five best parks in The Rocks.
Read Article
Solve these online jigsaw puzzles from past VIVID events in The Rocks
Miss exploring The Rocks during VIVID? We may not be able to celebrate this year, but you can enjoy the challenge of solving 12 jigsaw puzzles from 2013 to 2019.
Read Article
A Day Out at The Rocks: Local art & culture trail
Looking for things to do in Sydney this weekend? Discover the intriguing local artists, artisan makers and cultural experiences on The Rocks culture trail.
Read Article
Even More Things To Explore
Subscribe for events, guides & offers
Subscribe No Thanks